0
SHARES
80
VIEWS
Share on FacebookShare on TwitterShare on Linkedin

Oreo 8.0 is the most comprehensive version of Android as there has ever been. According to Google, it’s the most stable, feature rich and functional OS platform for mobile devices.
While on the surface it may lack major visual changes, what lies beneath is filled with impressive usability improvements and stunning future functionalities.

Latest Android OS release is clearly designed to reach as wide audience as possible, from satisfying the Android guru with its comprehensive feature set and unique customization potential, to easily fitting it for the iPhone switcher or tech fan with its simplified layout and intuitive user experience. Lately most of the smartphones manufacturers are increasingly giving up on their UI and delivering more of what Google serves up. These changes are intended to improve Android updates delivery process worldwide.

From the first sight, Oreo 8.0 design was not improved that much, but browsing Settings menu you’ll notice that it has been greatly reduced in size from previous version of Android Nougat, fitting even more options under larger categories. For example, Network and Internet category includes Wi-Fi, Mobile Network, Data Usage, HotSpot, VPN and Airplane mode.
Swiping down once from the top of the screen, you’ll see the six on/off toggles on a new light gray background, keeping things more visually clear with the white notification cards below them. Long pressing an icon takes you to the full Settings menu for that feature.

But that’s definitely not the main features that may leave you amazed, so we decided to list them down below and make a detailed review of all the improvements which are under the hood:

• Do Not Disturb, Airplane Mode, Data Saver and other important features that have been activated now appears at the top of the Settings menu.

• Google Play Music app notification shade will come as the album artwork, and this will be reflected in the lock screen background as well. Switching to another band, background will change instantly. 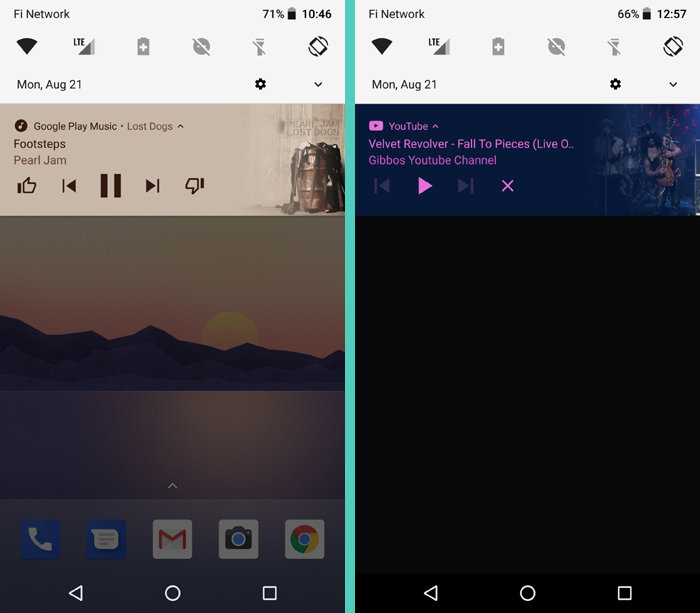 • Adaptive icons are one of the simplest ways Google has come up with to increase the consistency of Android experience across devices. Now all the apps on your device can be switched to various shapes just to create a more original look of your phone. Oreo lets every user choose shape they like best and the options are: system default, square, round, rounded square, squircle or teardrop.

• Snooze notifications lets you swipe a notification away to access two icons: one leading to the notification settings for that app and another that sets a timer before the notification reappears. By default it’s one hour, but you can also choose from 15 minutes, 30 minutes or two hours. 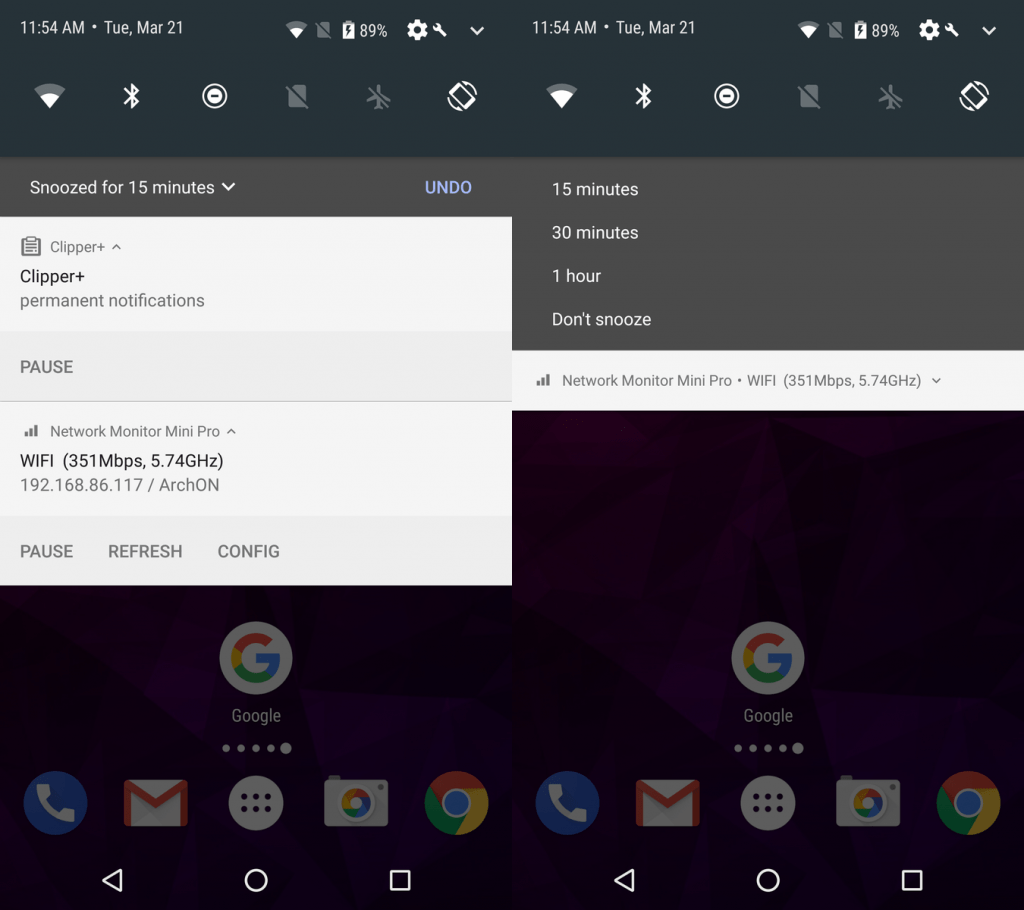 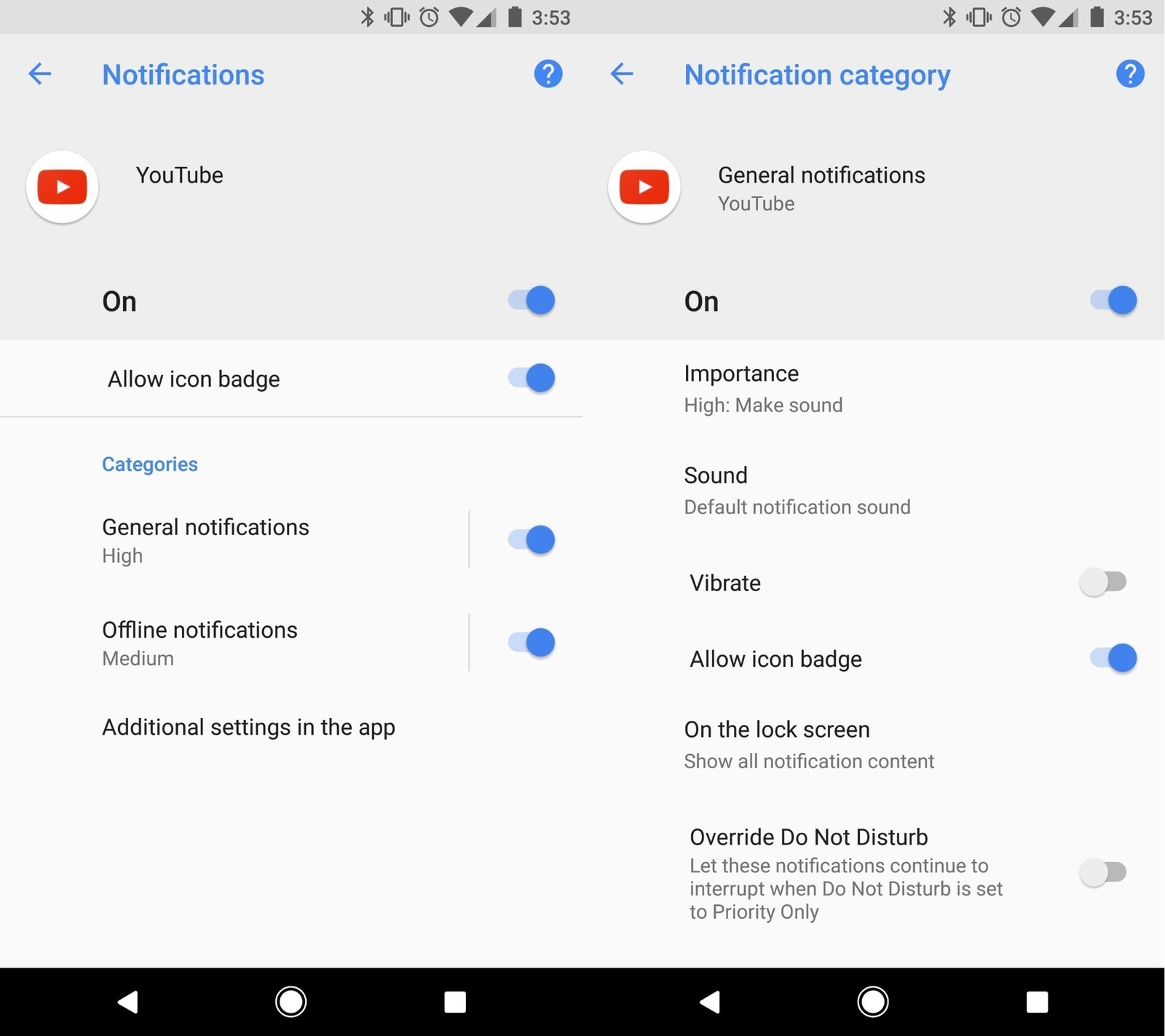 • Picture-in-Picture mode (PiP) works only in supported apps. Hitting the home button will keep your video playing in a movable window which you can drag around the screen and tap it to access playback controls or go back to full screen. Of course it’s possible to disable this feature on an app by app basis if you don’t like it. Just go to the Special app access section in Apps and Notifications to see all apps that supports PiP. 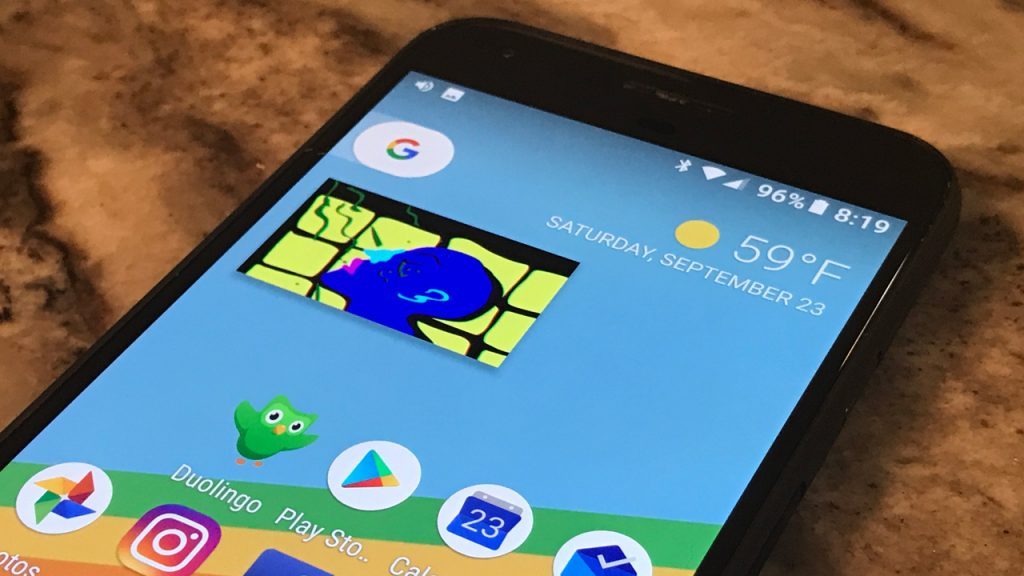 • Background execution limits basically are made for processes optimization and better battery life. By default, these limits only apply to apps targeting Android Oreo, but it’s easy to enable them for any app by choosing Battery usage option in the App Info section and turning the Background activity off.

• Google Play Protect lets you know even before installing an app that it has been certified as safe by Google Play team. According to Google, Play Protect scans billions of apps in marketplace daily to ensure things stay secure. 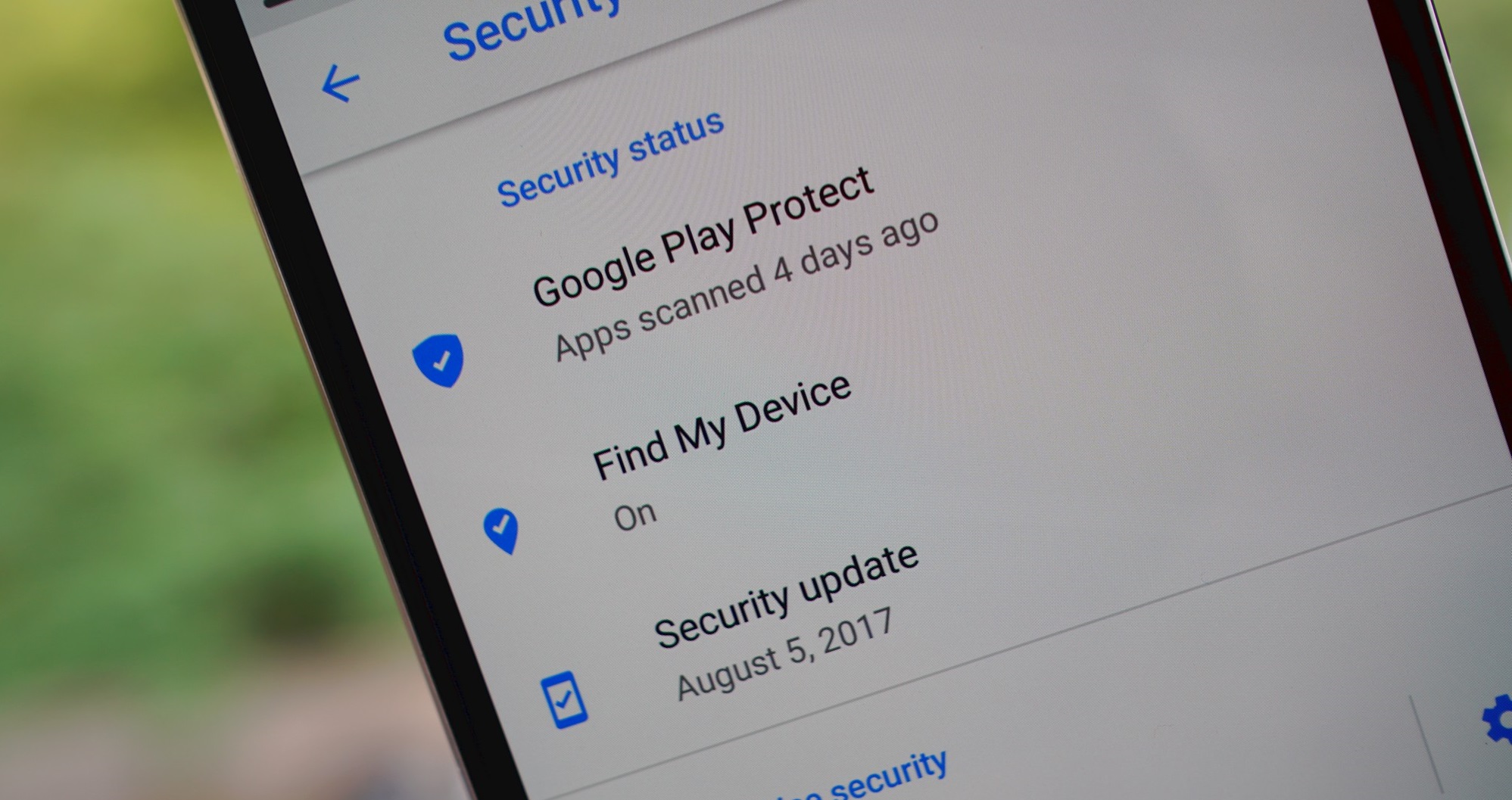 •  Find My Device also known as Android Device Manager is slightly improved for locking down or remotely wiping a lost device. Both Google Play Protect and Find My Phone can be accessed either via the Security and Location section or by going to Settings/Google/Security.

• Linkable files feature allows you to share files across the Internet via web links.

• Wi-Fi Assistant auto-connects you to high quality Wi-Fi and secures it with a VPN back to Google. Google lock icon appears at the top of the screen when device starts the VPN session.

• Notification categories gives more granular and consistent control over which notifications can appear and how intrusive they are.

• TextView autosizing let the size of the text expand or contract automatically based on the size and characteristics of the TextView, making it much easier to optimize the text size on different screens or with dynamic content.

• Notification dots is small dot feature that comes with a color matched to the app icon on which it appears, alerting to any notifications you may have missed. Dots are visible in the app drawer and on the home screen. Long press of the app icon will reveal a shortened version of the available notifications that can be swiped away or opened up for action. 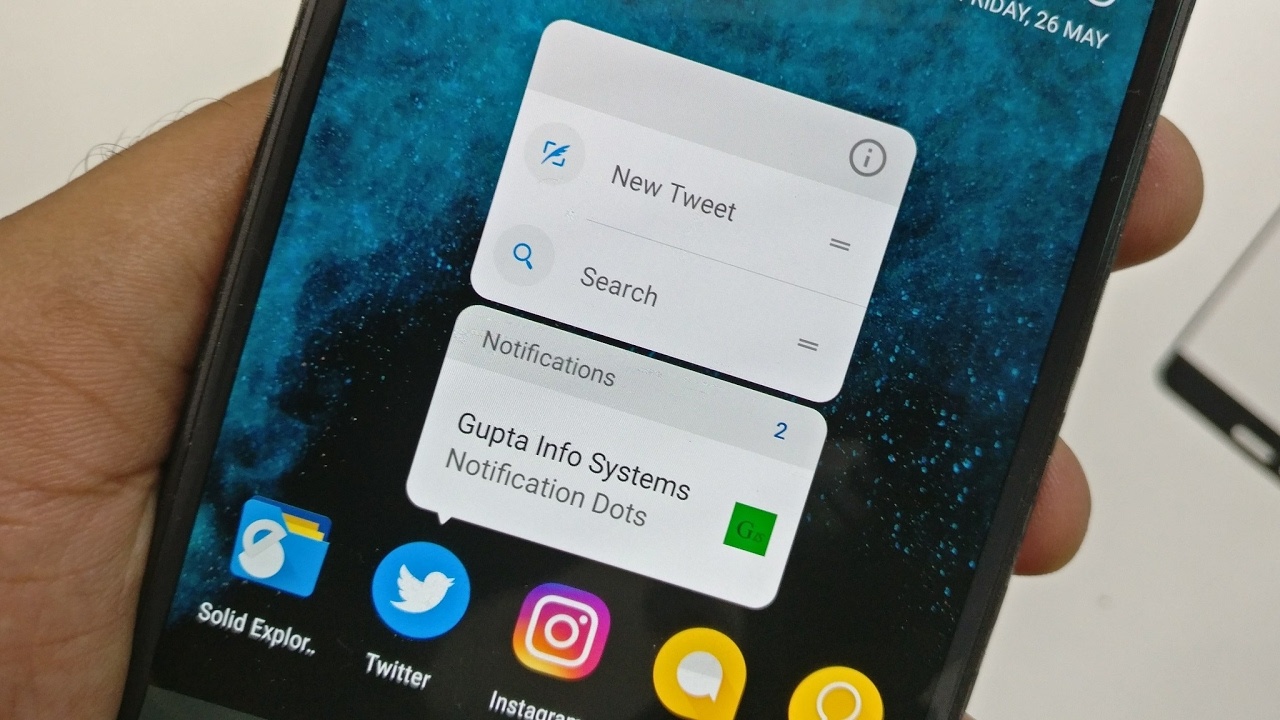 • Autofill API from now on, save you lots of time while surfing in the web. Simply give the access to a service like Google Autofill or a password manager like LastPass permission to collect your passwords, credit card information and personal details so Oreo can offer to automatically complete web forms and log you into various accounts in future. That’s another reason to keep your device safe with linked account and lock screen protected.

• Smart text selection is another big improvement that comes in Oreo. It’s a bit familiar to translation suggestion feature that has Marshmallow and Nougat, but in Oreo it’s even smarter. When you highlight a section of text, Android 8.0 will not only anticipate the phrase you’re trying to highlight, but it will also predict which app you’re likely want to use next and put it at the front of the copy/paste menu.

• Instant Apps are another big change in apps functionality. Latest Android version is capable of instantly launching app in your device without any basic installation process and it really seems like revolutionary idea. This feature works by downloading only the necessary core files needed to run the application main features. For example: You need to buy something from the internet so you click on the particular item and the app pops up right away on your screen, guiding through the usual purchase process. In this way users can pay for parking, use taxi and other services.
Instant Apps massively reduce the need for keeping those occasionally used apps on device at the same time saving up free storage space. 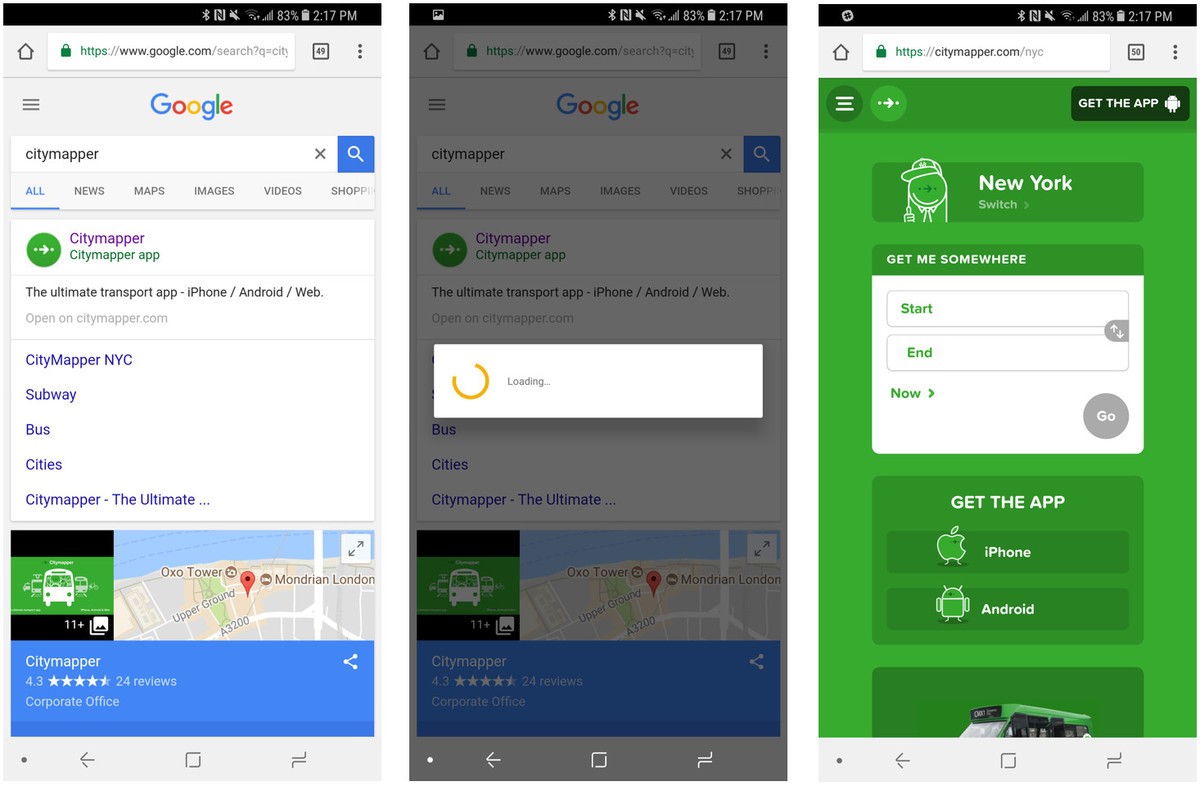 • Wi-Fi Aware is more known as Neighbor Awareness Networking. It creates a micro Wi-Fi network ant lets your smartphone connect with other devices around without using a traditional internet AP (Access Point). Apps will be able to communicate in both directions between connected devices, making all the services fully functional as using ordinary Wi-Fi network. However, no supported hardware is available just yet, but we’re hoping to see it running on the upcoming 2018 flagships.

• Bluetooth 5.0 – two times faster then earlier version, making data transfer and pairing processes much easier. It has 4x wider range and 8x higher broadcasting message capacity, keeping devices connected up to 200 meters straight or 40 meters around the house or indoors. With this high broadcasting range Bluetooth 5.0 is now able to support two sets of wireless devices at the same time. Watch visual explanation right below ↓

Android Oreo comes with couple main improvements that slightly might change the game in flagships phones market, especially when talking about new generation Wi-Fi and Bluetooth connections. Seems funny, but for the first time software was released with some early features while larger scale of devices will only be supporting them in near future.
Google’s main target releasing Oreo 8.0 was to optimize most of the undergoing processes that drains smartphone battery even while screen is off and to make whole software as light as never before. Obviously, the results may vary depending on device model so not all users may notice if the battery lifetime increased after getting this update, but slower smartphones should definitely become faster in variuos processes.
Android is the most used OS on the planet and it needs to run on a stunning range of devices that starts from 40$ and goes up to over a thousand. At that scale and with that much variety, it’s no wonder that Google decided to slow down on user-facing features and give more attention to the core.