So what is that security flaws and why it’s called “QuadRooter”?
QuadRooter is a set of four vulnerabilities only affecting devices with built-in Qualcomm chipsets. Security flaws are found in software drivers that control communication between chipset components. Drivers are incorporated into software builds that manufacturers develop for their devices. So if any one of the four vulnerabilities is exploited, an attacker can trigger privilege escalations and gaining root access. That could potentially allow a hacker to completely take over a mobile device.

Here are some of the latest and most popular devices found on the market today that use these chipsets:

How can mobile devices become exposed to this dangerous hack?
Using a malicious app. Such an app would require no special permissions to take advantage of these vulnerabilities, alleviating any suspicion for the users before installing it.

How can I protect my device from “QuadRooter”?
Since the vulnerable drivers are pre-installed on devices by the manufacturer, they can only be fixed by installing a patch from the distributor or carrier. Distributors and carriers issuing patches can only do so after receiving fixed driver packs from Qualcomm.
As you can see, critical security updates must pass through the entire supply chain before they can be made available to the end users. After that, the end users must install these updates to protect their devices and data.
From our practice we made some checkpoints which you should follow. They will help to keep your device safe from attacks:

There is an app available to see what QuadRooter flaws your device is vulnerable to. But other than arming yourself with knowledge there is not much the app or you can do until the patches roll in. 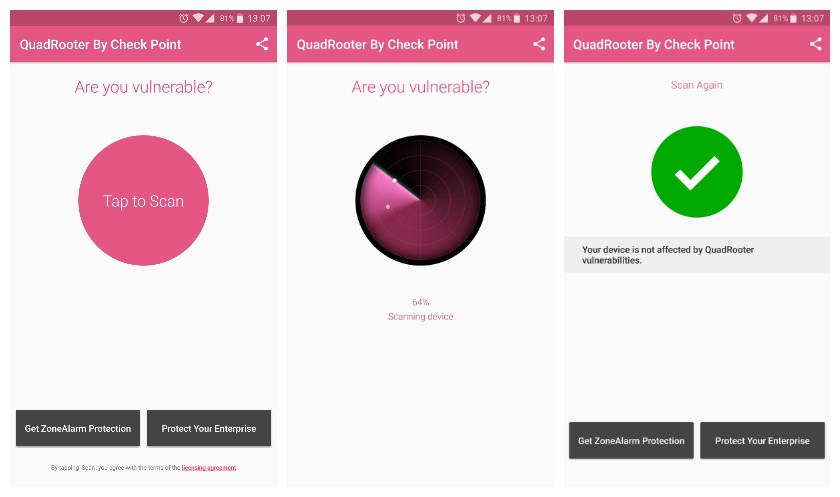 886
No Result
View All Result